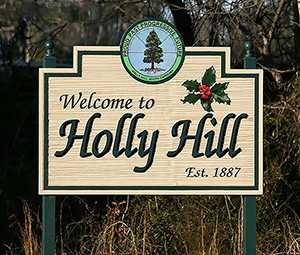 Holly Hill is a beautiful small rural town located in Orangeburg County, South Carolina. We’re close to major metropolitan centers such as Charleston and Columbia and near both fresh water Lake Marion and the beaches on the Atlantic coast!

The town’s motto is "Proud Past, Progressive Future."

Founded in 1887, Holly Hill is about 25 miles southeast of the county seat, the City of Orangeburg. According to Census 2010 figures, Holly Hill has 1,281 residents. The total population of Orangeburg County in 2010 was 92,501.

Holly Hill is located in the eastern part of Orangeburg County near interstates I-95 and I-26.

The main highway serving Holly Hill is U.S. Route 176, a spur of US 76 in South Carolina and North Carolina.

One of Holly Hill’s many appealing attributes is its comfortable weather -- warm summers and mild winters.

The annual average precipitation is 49.3 Inches.

The Town of Holly Hill was chartered by the State of South Carolina December 19, 1887.  It’s name is said to have originated from the presence of Holly trees and small hills in the area.  The construction of a state road between Charleston and Columbia is credited as giving birth to the community, but it was not until the entry of the railroad in 1886 that the point of the town was settled at the crossing of the railroad and the state road. Before the railroad was completed, two stores had been built.  A third was erected in 1886, and the original post office relocated therein.

The community did not receive its first industry until 1890.  A turpentine still was built about where the water tower now stands, and the vast pine forests in the community were tapped for sap to be processed.  The industry was operated by J.M. Owens who had a store building on the corner opposite the factory, where today a cottage stands.

The Town of Holly Hill has an abundance of historic and culturally significant places.